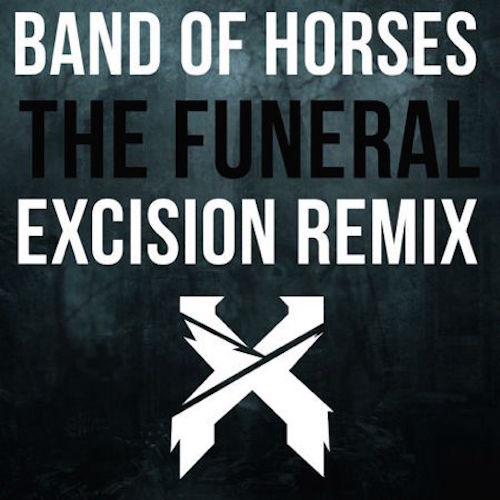 When electronic music fans hear the name, Excision, visions of robot dinosaurs, mechanical sounds and head banging bass addicts are the usual associations that come to mind. With an established career in slaying dance floors around the globe using mass amounts of bass and maddening dubstep tracks, its hard to picture the Ex man operating under any other format. But every now and again, even the most consistent of artists will come out with a release that makes fans stop in their tracks and do a double take. Such is the case with Excision’s newest release; a remix of the indie rock band, Band of Horses‘ hit track, ‘Funeral’. Excision’s rendition of the soothingly powerful, yet somber indie track, offers fans a surprisingly mellow perspective from the otherwise ruthless producer. That being said, this track is more of a rework than a remix, as it leaves the vibe and melody of the original largely in tact while boasting additional depth and punched up kicks. Using the hauntingly talented vocal work of lead singer Ben Bridwell, Excision beefed up this remix of ‘Funeral’ with deep, Bassnectar-esque electronic vibes and a subtle yet powerful facelift. Although this remix is coming somewhat out of left field from his usual style, it’s undeniable that this remix is a refreshing musical detour, as he treated the project carefully and properly. [Source]