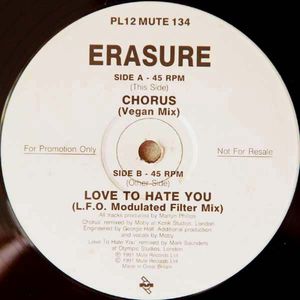 ’Love To Hate You (LFO Modulated Filter Remix)’ is taken from the forthcoming compilation ‘Always – The Very Best Of Erasure’ which will be released in October to celebrate Erasure’s 30th anniversary.

Featuring music from all stages of the band’s career – including ‘A Little Respect’, ‘Blue Savannah’, ‘Drama!’, ‘Always’, ‘Breathe’ ‘Love To Hate You’ and ‘Elevation’ – the compilation will be released on October 30th.

‘Always – The Very Best Of Erasure’ will be available in a 1-CD Digipak edition as well as in an expanded 3-CD deluxe hardback book format including remixes from Moby, William Orbit, BT and The Grid (Richard Norris with Dave Ball of Soft Cell) alongside 4 brand new mixes.